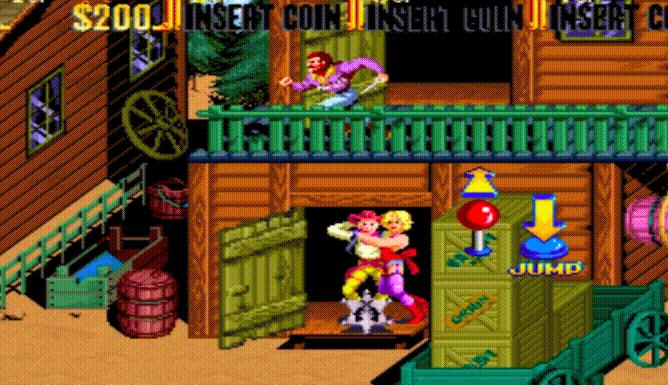 Who Remembers this Game?

The objective of this SPECTACULAR game is to beat some tough criminals  in eight levels, with a fight against a powerful boss character at the end of each level. When two players are playing the boss level  who does the most damage to the  boss is rewarded a  entire bonus for defeating him. Five of the stages are played on foot, two on the back of a horse, and one on a moving train. A bonus mini-game is played after the second and fifth stages, in which the player(s) can gain additional points by shooting the criminals  as they pop up. After all eight stages are cleared, the game restarts with increased difficulty. Here is another a link for a video to this game

In contrast to the Genesis version, the SNES version of Sunset Riders 1991 features a few changes. The barfly that kisses the player character in Stage 1 as well as the saloon dancers from Stage 4 are dressed more conservatively compared to the arcade version. Hunter dogs, which were present in the first segment of the final chapter in the Genesis version, were removed from the game . The Native American enemy characters from Stage 6 were removed and replaced with regular criminals, leaving only Chief Scalpem (who is renamed Chief Wigwam and re-voiced in the SNES game) as the stage boss. The dynamite-tossing female bandits were replaced with male bandits as well.

All boss and cutscene dialogues had subtitles added  subtitled. While most voice clips are carried over from the arcade, some voice lines are either re-worded or replaced with other less offensive lines for censorship purposes.

I think its a Great games to play so in total if you a retro player this could be the game for you.