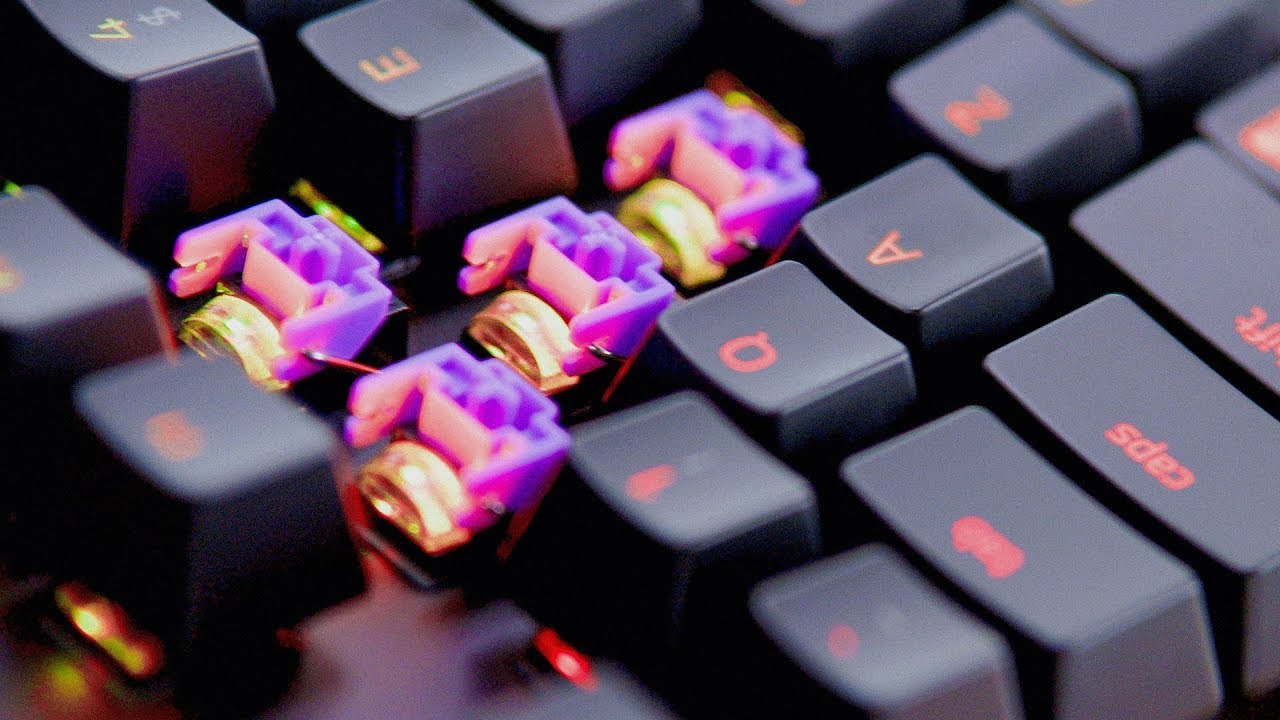 – Hey guys, this is Austin, and you’re probably familiar with the wonderful, wonderful sound of a mechanical keyboard. Over the last few years, mechanical keyboards have absolutely taken over the gaming market and for good reason. When they first came out, they were very, very expensive, but now on Amazon, you can pick up something like this for 40 bucks.

The feedback, kind of on you. So when Razer drops off a box with their brand new keyboard and all new mechanical switches, I’ve got to admit I’m definitely curious. That’s so awesome.

So this is the Razer Huntsman. Now what’s a little bit different with this keyboard is the idea that it’s got an optomechanical switch.

The main difference between this and a standard mechanical switch is that as opposed to when you press the button and you’re actually pressing a little sort of physical button on the bottom of the switch, instead when you hit that key, there’s a beam of light that’s going across.

So once it starts to depress, it actually cuts off that beam of light, which immediately sends a signal from the keyboard to your computer that that key has been hit. And because Razer’s Razer, they had to go completely over the top with this, a giant model of what the actual switch looks like. I’ve already seen this, and it is totally and completely ridiculous. Just look at this.

So for scale, this is what the real switch looks like versus the giant massive switch that they provided.

It’s actually a really cool design, and it sounds cool. So this switch comes in two models right now, the standard Huntsman as well as the Huntsman Elite. Now the main difference here really isn’t to do with the actual key switches, but this guy’s going to have a couple of extra features like some MIDI keys as well as a wrist rest. So if we pop this guy open, it’s going to be the same size keyboard, and you still get all of your number row, but you’ve got your, you’ve got your full RGB wrist rest.

Not only is this guy going to be padded to give you a little bit of extra comfort when you’re typing but it also does have full RGB underglow, which, especially when you pair it with the very RGB-ified Huntsman, it’s gonna look kinda ridiculous.

Now that is some RGB action. So if I attach the wrist rest, which should all be magnetic here, we’re going to get the underglow as well. Can we actually kill the lights? Yo, that is so cool. So especially with the LED underglow as well as every single key being fully RGB, that looks dope.

The way this works is similar to the Bloody keyboard, and that, while you’ve still got the nice responsiveness and you still have that nice click, you’re also not having to deal with any sort of lag or latency that has to do with actually pressing a physical button. All you need to do is press the key down hard enough to sort of block that beam of light and you’re going to be good to go. Now Razer’s actually not the first to making a key switch like this. The Bloody switch has been around for a little while, and while Bloody switch sounds like a really bad name, it is a very similar concept except that Razer’s sort of taken it to the next level, at least in theory, with stuff like adding a stabilizer bar, which if I bring up our super helpful model is this bar right now which will help the switch from sort of leaning either side when you actually press it. So for example, if I press it on the edge versus in the middle, it should still feel the exact same.

So Razer quotes a ton of really nerdy specs, like how this is supposedly 30% faster at response time versus a standard clicky switch. And you’ve got a very light 45 grams of actuation force. But I really care about is how it actually feels to use. Actually I’ve got to say that this does feel pretty decent.

So supposedly, you’re cutting up to 20 milliseconds of delay off by using this key switch as opposed to a standard mechanical, and while I really can’t judge that for myself, it does feel pretty much instant.

When you press a key, it is right there. Now there are some other things that you’re not losing here as opposed to a standard mechanical switch. Obviously, you’ve got the sound and you’ve got the feedback, and it is a little bit of a lighter touch so a lot of mechanical key switches sort of feel like you’re kind of pressing down on it until it finally compresses, whereas this is sort of very light to the touch.

But honestly, I don’t hate it at all. It is a kind of nice sort of different feel.

Now there are a couple of major differences between the Huntsman and the Huntsman Elite. So on the smaller side, you’re going to be getting MIDI controls on the Elite as well as the digital dial, which you can use for volume or other features on the computer, but the wrist rest is going to be the big one. Now it’s actually pretty well-designed. It is going to be attached with magnets as well as the pogo pins. And right now, it does require you to use a second USB port from the keyboard to be able to power this guy and send data, but because you do have that full RGB control, in theory, you can actually attach different accessories to the keyboard, so say something like a, maybe a wireless mouse pad or a wireless charger for your phone or something, it could be attached with these pogo pins in the future.

Oh wow, that actually feels pretty good. So it definitely does help that I’m playing on a higher refresh rate monitor like 120 frames per second, but I mean there actually is, I don’t know, it’s hard to say.

Could be placebo, I’ll totally admit. But it does feel like the response in this actually is pretty much right there. I don’t know.

I’m actually kinda curious to see how big of a difference this is compared to a normal mechanical keyboard. Now this is definitely not a scientific test, but I’m going to put the 40 dollar mechanical keyboard side by side with the Razer to see if I can actually tell any kind of real difference. So because we do have the higher refresh rate monitor, hopefully that should sorta take any other latency out of the way. And obviously the mouse is quick, but can I actually see a difference here? Because I do feel like there’s a legitimate chance that this could be placebo, right?

But it feels like the Razer does cut down on a little bit of latency. Oh, dude, you know what, the Razer actually does feel a little bit faster. Wow, that’s actually kinda surprising. I will say though that I definitely do like the way the Razer switches feel.

It’s sort of, at least sort of from my personal preference, it feels about right with the level of clickiness as well as how light it is.

I don’t like something that’s going to be like I’ve got to really shove it down to actually get any kind of click on it. Now, mind you, I’m not trying to say that everyone should go drop your $40 Amazon special and spend $150 or $200 on a Razer keyboard, but I will say it does actually feel like there is a real difference. And besides that, you are still getting stuff like the RGB chroma stuff, you’re getting a nice feeling keyboard, you’re also getting something that honestly I feel like kind of looks pretty nice too, especially if you want to fully customize the lighting.

I actually didn’t think there’d be a noticeable difference. At $150 for the Razer Huntsman and $200 for the Elite with the wrist rest, it definitely doesn’t come cheap, but if you’re looking for the ultimate gaming keyboard of 2018, this actually kinda feels like it’s it..

Read More: Now You Can Play Games on Any Screen